A tragic week in Chelsea and Hell’s Kitchen

Last week we were reminded that traffic violence continues unabated in our district . A 36 years old bicyclist was killed going east on 26th Street between 7th and 8th Avenues. Videos show that he was taken over by a commuter bus driver who caused him to fall and be crushed under the rear wheels of the bus. Gothamist 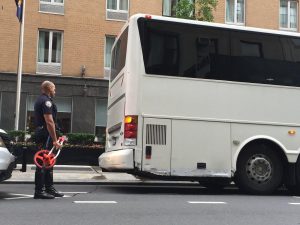 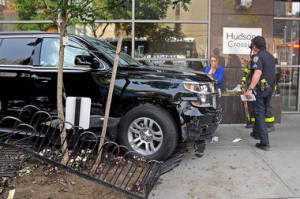 On Thursday, at the  southwest corner of 37th Street,a driver traveling south on 9th Avenue tried to beat a red light and lost control of her vehicle, the SUV jumped the curb injuring 9 persons, 4 severely, one critically. DNA info

How can the city stop the wave of violence? When will it end? Can we all drop our kids at school or pick up groceries and hope to come back alive? Or do we continue to live in a state of siege where no one will protect us! Where are our tax $$ going ? to make it easier for vehicles to kill us?

Mayor DeBlasio said Friday on WNYC that they have to get to the bottom of it. I say:  you already had 3 years to do that …  bicyclists fatalities are going up. Since 2013 bicyclists fatalities have increased from 11 to 21 in 2016 , and injuries have shot up 37% . This is not a one by one issue, it is an epidemic. You have to treat it in a systemic way.

Buses are restricted to truck routes only and these buses had no business being on those streets. Will the DOT take back the bus company permits ? Will the DOT install  cross town protected bike lanes. In 2014 CB4 had requested a study of such bike lanes on cross streets between 23rd and 42nd street – We need a connected system not just safe avenues dumping cyclists in horribly dangerous unprotected segments . Will the DOT have the guts to get it done? and how fast?   See Gothamist article Finally we need traffic agents and bollards at 37th street( 9 motorists and 12 pedestrians injured in the last 5 years). Up to recently there was a traffic agent at 37th street and 9th Avenue a very tricky intersection with Lincoln tunnel traffic .  Will the NYPD reinstall this agent?

Overall DOT needs much more systemic approach to bike lanes, safety and buses. NYPD needs to treat illegal and dangerous behaviors by drivers as a problem that deserves full attention and a rigorous and neutral enforcement. NYPD and DOT turning a blind eye to enforceable offenses leads to a sense of permissiveness which increases the chances of crashes, injuries and fatalities .