Another Death in Hell’s Kitchen – Pedestrian Crossings still not safe 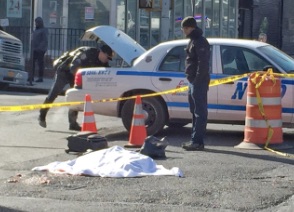 This is not new – this is the 8th person to be killed  in the last 10 years in Hell’s Kitchen , while in a pedestrian crossings , with the walk sign and the second by a dump truck –  and it  reminds us that in spite of years of advocacy and success,  our job is far from done:

The people interviewed said “she had a hood over her head, she did not see the truck” .. implying that  the pedestrian was somehow at fault, that it was her duty to look over her shoulder when she has the walk sign.  NO! it is NOT. If the government tells them to WALK, It is reasonable for the pedestrians to expect the authorities have done everything possible for them to be safe. They also expect the driver will yield to pedestrians as required by the law.

And then officials said ” the driver did not see her” as if this was sufficient to exonerate the driver! WRONG AGAIN !As a driver your main job is to watch and to yield at pedestrian crossings.

Why would signals be deliberately designed to put cars and pedestrians in conflict? As early as 1922, people had figured that it was not safe to let cars conflict with other cars at intersection, so the green and red signals were invented.  100 years later because of our culture of unjustifiable tolerance towards drivers and their needs, DOT is still reluctant to admit that it is not safe to let cars conflict with pedestrians.

Now that speeding has ben tackled , turning vehicles are the next pervasive menace to pedestrians: 27% of pedestrian deaths and injuries occur in the crosswalk with the walk sign . DOT needs to focus its energy and resources on eliminating conflicts with turning vehicles and making pedestrian crossings 100% safe. Without that, Vision Zero will never be achieved.