After a number of Community Boards banded together to ask the DOT to protect intersections along bike lanes, a study is underway to look at all intersections treatments and come back with recommendation some time next year.

As part of this study, the DOT installed various tests, bollards on the upper west side, Columbus Avenue at 70th Street and Amsterdam Avenue at 85th Street; and a split LPI in Hell’s Kitchn (9th Avenue at W38th Street) . We look forward to get your feedback.

This comes on the heels of DOT’s publication of ” Safer Cycling” a report that analyzes all causes of death and injuries for cyclists. It found that while cycling is getting safer, especially in CitiBike’s territory, the vast majority of crashes occur on streets without protected bike lanes , and 86% of serious injuries occur at intersections. Something pedestrians are well aware of. 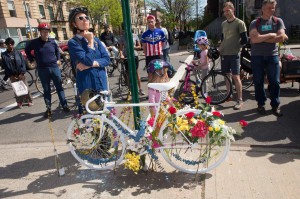 Since 2009, CHEKPEDS has been advocating for Split phase signals at all intersections on bike lanes.