9th Avenue’s sidewalks are already overcome with sandwich boards, sidewalk cafes and storm enclosures, but hogging excessive sidewalk space in the name of accessibility to establish commercial presence is going too far! This was recently the case on the corner of 36th and 9th Ave where a new establishment began construction. The space was vacant for many years, and a new establishment was a welcome addition to the neighborhood. Welcome that is, until construction of an access ramp began outside of the store front. 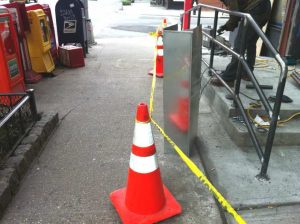 This particular corner is already congested with 6 news boxes, a mailbox, a trash can, a traffic light, a protruding building stoop and a tree pit, not to mention the delivery bikes, and intense pedestrian traffic.  At a width of 5 ½ feet this new ramp was leaving a mere 4′ of walking space of already overcrowded sidewalk on an Avenue.

As the weeks passed, my frustration  grew as I waited to walk single file down the busy and crowded sidewalk past the access ramp. Fearing that nothing would be done,  I unearthed the relevant city regulations : The building code, Title 27 of sub-chapter four on Building Limitations stated: *§[C26-407.2] 27-308 Ramps. –(a) When a building erected prior to December sixth, nineteen hundred sixty-nine is altered to provide access to individuals who use wheelchairs, ramps constructed to provide such access may, with the approval of the commissioner, project beyond the street line for a distance of not more than forty-four inches. (b) Ramps shall comply with the applicable provisions of reference standard RS 4-6. *Local Law 58-1987.

At 5 ½ feet wide my suspicion was correct, that the size of this ramp was violating city building codes.

With this new information, I began to strategize on my next move. Then to my delight, as I walked by I noticed a city inspector measuring the side of the ramp. The very next day the construction crew was out with a jack hammer removing nearly 2 feet from the width of the ramp. This small victory for the pedestrian right of way goes to show us that while it may take time, when concerned citizens take action, they  sometimes get results. It’s only 2 feet but in this part of the city 2 feet of walking space makes a world of difference.