It is well known that Robert Moses’ policies of razing poor neighborhoods to build highways and making bridges so low as to prevent bus access to Jones Beach were racially motivated. In our own  neighborhood of Hell’s kitchen, poor residents saw their buildings destroyed to make way for the Lincoln tunnel. While no one is accusing the current administration of being racist, some long-standing rules must change for the City to erase the profound transportation disparities that disproportionately affect people of color.

Twice as many New Yorkers commute to work by public transportation as by car[1]. Commuters walk for a good part of the trip: some walk 25 minutes crosstown rather than wait for a bus that never arrives. Many residents walk to work. One million City children walk a portion of the way to school.

Yet, not a single dollar of NYC Department of Transportation budget is dedicated to maintaining the sidewalks which are used by 3.3 million people every day.

And minorities are disproportionally affected: 1.5 million use public transit and walk – twice the rate of white residents. The number of Hispanic people who use transit and walk is triple the number who drive to work.

In Chelsea and Hell’s Kitchen where 40% of the population is African American, Hispanic or Asian, and two large New York State Housing complexes are located, our organization works tirelessly to deliver  traffic safety equitably. This is not easy. The administration’s practices often get in the way. 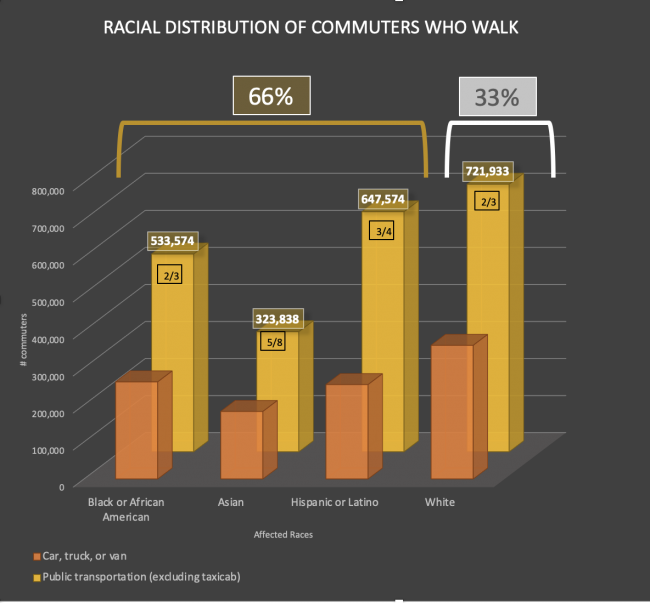 The City used to be responsible for sidewalk maintenance but left them in disrepair and was sued constantly for injuries. To remedy the situation, in 2003 the Bloomberg administration transferred the sidewalk maintenance to the adjacent property owner. At that time the car culture was permeating all aspects of the Department of Transportation. Its commissioner was replacing street signs with highway signs. Pedestrians were considered irrelevant.This privatization of our public space has had devastating consequences: it made the sidewalk invisible to the City as a transportation infrastructure and its 3.3 million pedestrians invisible to the City government as constituents. The DOT maintains car lanes, bus lanes, bike lanes, even parking lanes but not walk lanes! Yet, two thirds of the working population walk every day. Minorities comprise 66% of those pedestrians. 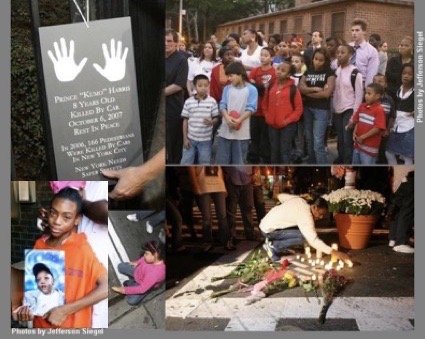 That the City will not assume responsibility for any pedestrian infrastructure has far-reaching safety consequences: It prevents simple features from being deployed where needed and particularly in underserved communities.

In order to install a “temporary curb extension” which shortens crossing time and slows down turning cars, DOT requires the adjacent property owner to provide insurance and to remove snow, even though the extension is no more than paint on the street. There is no such absurd prerequisite to paint a bike lane, a pedestrian crossing, or stripe an area for parking.  As a result, installations occur mainly in Business Improvements Districts (BID) that have the financial wherewithal to assume the costs. These BIDS cover a very small portion of our City; for the other 99%, one cannot expect to walk safely.

Today DOT fixes a pothole on the road within a week. But, since one is at the mercy of the property owner’s goodwill a destroyed sidewalk takes 6 months to repair. A particularly  egregious stretch of sidewalk on 9th Avenue in front of a tenement with affordable housing took 18 months to get repaved. Consequences for a pedestrian are significant. A bump in the road is nothing for an SUV, breaking an ankle is far worse. Falling can be life threatening to seniors. A friend of mine broke an ankle on a sidewalk. After three surgeries, the hospital bills came  to $ 120,000, and just like that, she had to declare bankruptcy.

This is how obscure policies undermine equity.  It is time the City corrects this injustice: it must recognize its diverse walking population, maintain the sidewalks as well as any other lane of traffic like other cities, such as Washington, D.C., and Boston do and roll out pedestrian safety features in an equitable way to end discrimination against the poorest of pedestrians.