“By increasing the number of protected left turn signals at large intersections and taking a closer look at locations with chronic right-of-way violations, we can make Vision Zero a reality.”

At last year’s Vision Zero conference CHEKPEDS advocated for such a measure. We have  been a vocal supporter of Left turn signals to improve pedestrian safety. On the Chelsea portion of the bike lanes where left turn signals are installed, crashes were reduced by 50% versus 30% where they were not . As part the Hell’s Kitchen Traffic Study , Chekpeds has requested the installation of over 10 such signals in our neighborhood, and  two new ones were  just installed at 41st street and 9th avneue where two people were killed and at 43rd Street and 9th Avenue. 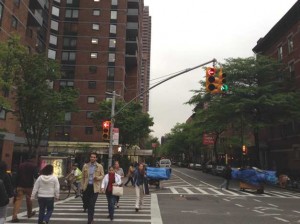 According to a report commissioned by the National Highway Traffic Safety Administration, New York State has the most pedestrian fatalities caused by left-turning vehicles of any state in the country. And according to the New York City DOT, left-turn pedestrian collisions outnumber right-turn collisions 3-1.

The Right of Way Law, enacted by the City last year, increased penalties for drivers by making it a misdemeanor to hit pedestrians or cyclists with the right of way. Public Advocate James believes quarterly reports on violations of this newly established law will help inform where additional safety measures are needed.