6 WALKIE Awards given for Commitment to Pedestrian Safety

Against a backdrop calling for Safety, about 80 people gathered this month at the Laurie Beechman Theater  to honor the recipients of the first WALKIE awards. 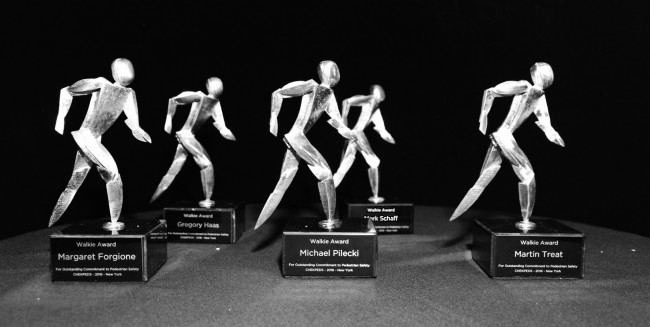 Jordan Baker-Caldwell a New York City native and Hell’s Kitchen resident sculpted the awards. Jordan’s work has been exhibited at venues including the National Metal Museum and the Museum of Arts and Design (MAD). His 15ft sculpture “Golem,” is currently on view at Marcus Garvey Park at 121st and Madison Ave. Jordan is currently working on a major sculpture to be installed on the Canoe Plaza. 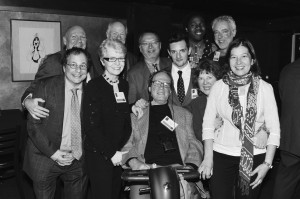 The first award was given to Margaret Forgione, DOT:  Margaret led d a four year effort to build the Canoe plaza where a 400 ft. lane of parking was reclaimed for pedestrians and planted with trees; plus 124 pedestrian refuges along bike lanes , 2 new traffic lights, and the relocation of long distance and jitney buses. Many DOT staffs were on hand to honor Margaret 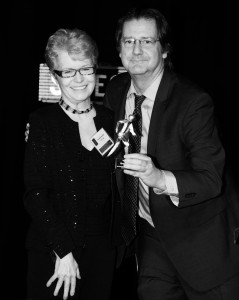 and Gregory Haas, DOT who received the second one : As part of the Hell’s kitchen Transportation Study Greg came up with the wise solution of directing 120 buses per hour to a new contra lane on Dyer Avenue to open the bottleneck at 42nd Street and 9th Avenue. He is finalizing the changes to make 11th avenue one way above 44th Street. And he helped us get 24 Lead Pedestrian Intervals and 10 fully protected pedestrian crossings. 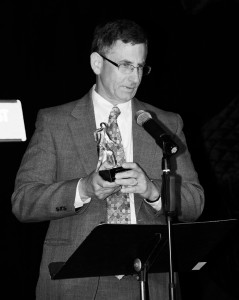 Mark Schaff of the New york and New jersey Port Authority bus terminal permits the community to use Port Authority patches of land, including the Dog Run, Theresa’s Park, Alice’s Garden, the Triangle and the Canoe. Mark was instrumental in many of the changes proposed by the DOT, including the new contra lane at Dyer Avenue. He gives a human face to the Port Authority, and makes tunnels ramps and bridges more tolerable. Dana Ehler, Cedrick Fulton, and Jerry Lindenmeier were on hand to congratulate Mark. 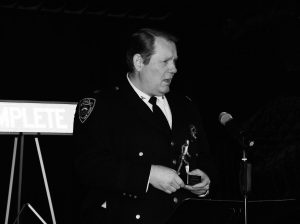 Deputy Inspector Pilecki worked closely with CHEKPEDS and our Community Board to enforce intercity bus laws on 42nd Street, bringing into the fold a number of jitney companies which were operating illegally. By working with us, evaluating what does or does not work, and treating us like partners, that problem was solved. Deputy Inspector Pilecki is an example of what works at NYPD:  treating the community like partners, being open-minded and accessible, doing smart enforcement and getting results. Chief Chan honored us with a speech. 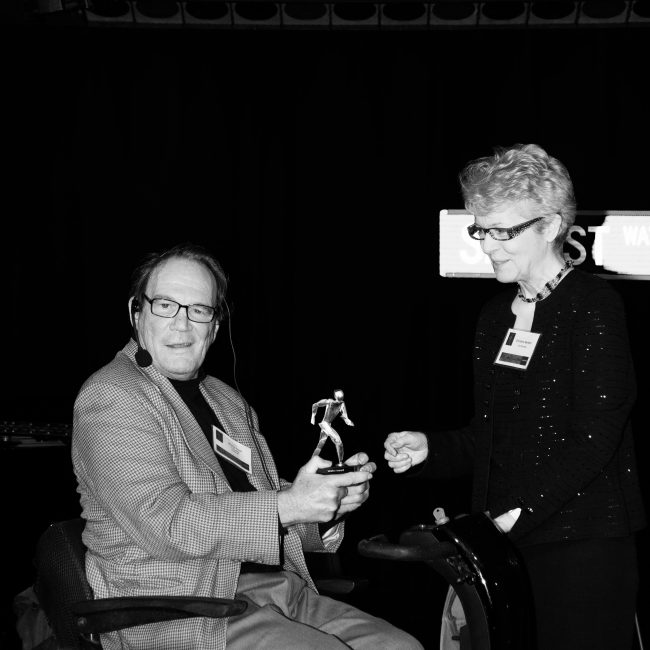 And finally both CHEKPEDS founders Martin Treat and Christine Berthet received an award from the board members.

CLICK here to view all the photos of the ceremony