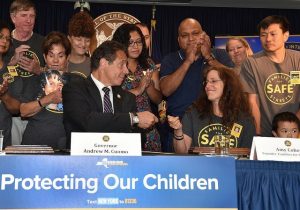 After four  years of heroic advocacy by Families for Safe Streets and Transporation Alternatives,  and a Hail Mary save by the joint efforts of Governor Cuomo and Council Speaker Corey Johson, the new Albany legislature has finally adopted a sensible package of bills to allow more speed cameras around schools.

The increase from  140 to 750 is a giant step and the expansion in hours from school hours only to 6a.m. to 10 p.m. and the cameras can now be placed within a 1/4 mile radius from each school, allowing them to operate at the dangerous locations where students and local residents have to cross. Thank you to Assembly member Dick Gottfried for his strong support to this common sense legislation. Speed cameras have proven to save thousands of lives in all countries and cities where they have been used.

“The data is clear: traffic safety measures like installing more speed cameras help save lives. They reduce injuries and fatalities for pedestrians, motorists, and passengers,” said Assembly Member Richard N. Gottfried, who cosponsored the New York City speed camera legislation, A. 6449, which was sponsored by Assembly Member Deborah Glick and Senator Andrew Gounardes. “I believe every local government ought to have authority to install speed and red-light cameras without state-imposed limits or need to renew the law. But this bill is a big step in the right direction,” said Gottfried.
In New York City, speed cameras  are placed in school zones to protect students by photographing the license plates of speeding vehicles. The speed cameras can be operated from an hour before the school day to an hour after. The speed cameras can be operated during nights and weekends when school-related activities are taking place.
According to a 2014 study by the Department of Transportation, school zones with speed cameras reported a 63 percent decrease in area speeding and a 15 percent reduction in crashes compared to those without it.
There are now 140 cameras installed in New York City. The bill passed today would expand the speed cameras program to 750. There are roughly 1,700 schools in the City.
NY Daily News
NY Times
NY Post
StreetsBlog
AM NY
Gothamist
Brooklyn Reporter

This entry was posted in CHEKPEDS. Bookmark the permalink.