On July 13th , in the middle of the day, Port Authority and DOT started to operate a contra lane on Dyer Avenue, between 42nd and 41st Streets for buses to reach the Lincoln Tunnel in a safer way. This resulted in 90 less left turns by buses at 42nd Street and 9th Avenue a dangerous intersection used by thousands of pedestrians. Our DOT Commissioner does big things quietly ! 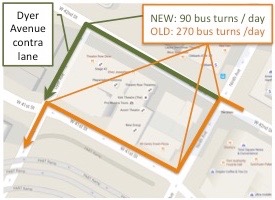 Every day between 4 and 6 p.m.  about 90 commuter buses travel west on 42nd street,  turn south at 9th Avenue, and then turn west at 41st Street and 9th Avenue to reach the Lincoln Tunnel. A large proportion of buses there are MTA buses going to Staten Island. Both of those intersections are very dangerous according to Vision Zero.

We all know that left turning movements on a two-way street cause many crashes.   In addition, the buses contribute to traffic which causes heavy congestion on the northern part of 9th Avenue . 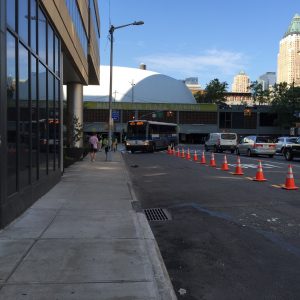 Now, from  4 to 6 p.m. every week day, while the other three lanes continue to go north, one lane of Dyer Avenue goes south, with cones and changeable signs. Instead of turning south at 9th Avenue, then west at 41st  Street and south at Dyer Avenue, the buses continue west to the Dyer Avenue intersection with 42nd Street and make a southbound turn in the contra lane, which brings them directly in the tunnel . Two traffic agents are located there to direct the operation. 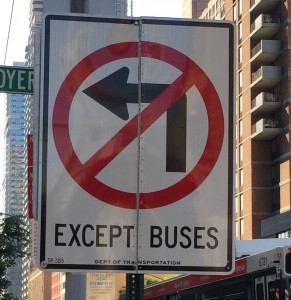 As a result the 42nd Street intersection with 9th avenue sees very few buses turning at that time of the day, and the congestion to the north of 9th Avenue is reduced.  (there is currently construction of a hotel on the west side of 9th Avenue that makes matters worse for the time being). Further, MTA has rerouted all its buses at the other times the day to use 11th Avenue to reach the tunnel. This is a major success.

Removing 90 left turn movements by buses everyday is a major achievement, that will without a doubt, reduce crashes and injuries at this crowded and dangerous intersection . In total , the number of turns is reduced by 180 per day. The community had worked closely with DOT on these changes. We are extremely grateful to the DOT and the Port Authority staff who came up with this brilliant idea and implemented it as part of the Hells Kitchen Traffic Study.