Success: Reclaiming our Streets from Buses

Last month , CB4 Chairs of Transportation met with 20 bus companies, including New Jersey Transit, DOT , Port Authority  and NYPD to discuss the various issues that plague our neighborhoods. Two major successes came out of the meeting: 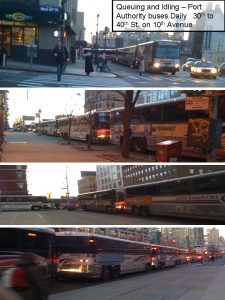 New Jersey Transit indicated that they have implemented, jointly with Port Authority , a new protocol for buses coming in form New Jersey in the afternoon: instead of leaving early and queueing in the street and the bus terminal, they now leave right on time and proceed directly into the terminal without being diverted to the street. This requires an intense use of the PA police officers who dislodge any bus double parked in the terminal. This also requires that other companies follow the same protocol.

As a result, the massive queues of idling buses on 10th avenue from 30th to 40th streets have disappeared between 4:00 and 5:30 pm. Depending on the conditions , the diversion may be reactivated at 5:30 pm. It is still an experiment but the results are stunning.  People can cross the street on 10th Avenue without risking their life, businesses can have access to their lots and the MTA bus can pick up passenger at 34th and 37th Streets. In short a normal life.

We also learned in the meeting that a traffic agent at 40th Street and 10th Avenue wassystematically directing buses away from 40th Street and up 10th Avenue. Bus companies complained that once the bus drivers reached 44th Street, they were getting tickets, the result of a combined CHEKPEDS and 44th Street Block Association efforts. 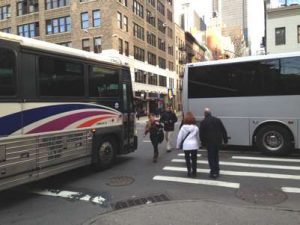 As a result Chief CHAN ordered the traffic team to let buses use 40th Street. Since then 44th Street has seen a drastic reduction in bus traffic and those same buses do not clog 9th Avenue or effect four  dangerous turns that put pedestrians at risk.

One Response to Success: Reclaiming our Streets from Buses