The Power of Enforcing the Law

Without the strict application of the Right of Way law, the dialogue about pedestrian safety with the MTA drivers would have never taken place. 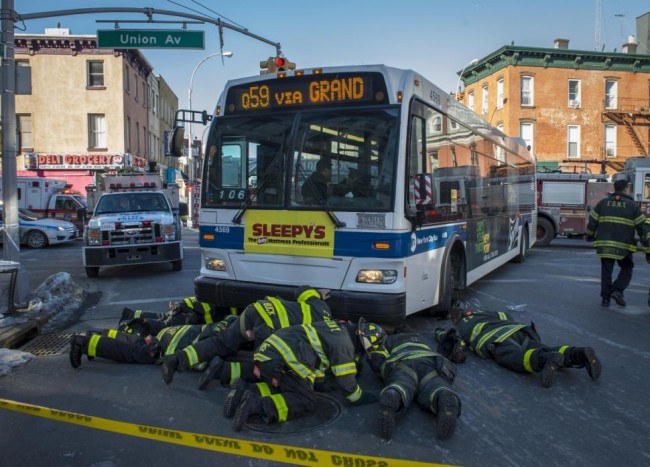 Jiahuan Xu, 15, was struck at the corner of Grand Street and Union Street in Brooklyn on Friday, February 13, 2015.  She was pinned under the  bus and rushed to Bellevue Hospital. Jihuan had the right of way, in the now too familiar scenario of the turning vehicle hitting a pedestrian in the crosswalk with the walk sign.  There were nine pedestrians struck and killed by buses last year.

The Bus driver who remained on the scene, was arrested and faces a misdemeanor charge under the city’s recently enacted Right of Way Law. Police took him to the 90th Precinct for a desk appearance ticket and he faces a $250 fine and up to 30 days in jail if convicted.

Shockingly TWU Local 100 spokesperson JP Patafio said bus drivers should not be held to the standards of the Right of Way Law because the ”law of averages has it we’re going to get into an accident.” Samuelsen, the head of the union acknowledged that “no one is above the law” but faulted the new Vision Zero legislation. ”It is clear that the spirit of Vision Zero …did not envision the arrest of bus operators,”.

To our delight, after he lobbed some verbal grenades at the advocates and came under heavy twitter and  Facebook fire in return, Transit union president John Samuelsen ordered Monday the 10,000 bus drivers he represents to yield to pedestrians in crosswalks until they reach the sidewalk,“Do not move your bus until all is clear,” “If you do not make your schedule, so be it. If traffic backs up as you await the ability to make an unquestionably ‘safe’ left turn, so be it.”

Indeed!  Sad they would have to be told. There were nine pedestrians struck and killed by buses last year.

More importantly , bus drivers and pedestrians should join forces:  both are the victims of defective roadway design : we need DOT to install split phase signals at all these intersections so that it is clear of who has the right of way.