A new two-way bike lane is rolling into Central Park along the park’s Terrace Drive, a popular route for crossing the park at 72nd Street. 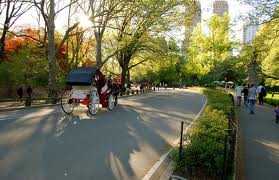 The current one-way path from east to west will be supplemented by a new adjacent lane to serve cycling from west to east. The new lane will be installed this summer, as early as June. Adding the extra lane for cyclists will remove one lane of car traffic on the route, which is only open to motorists on week days from 8 a.m. to 10 a.m.

A crosstown two-way bike path opened near 96th Street last summer, but cyclists have to hop off their bikes to reach it.

This entry was posted in CHEKPEDS, Complete Streets, Uncategorized and tagged bicycles. Bookmark the permalink.