Why is Vision Zero progress so slow in NYC?

The third edition of the NYC DOT’s Street Design Manual was recently released and  I could not wait to read it. Why? This book reveals the DNA of the Department of Transportation, the hard-wired code the engineers follow and gives a glimpse into its evolution. 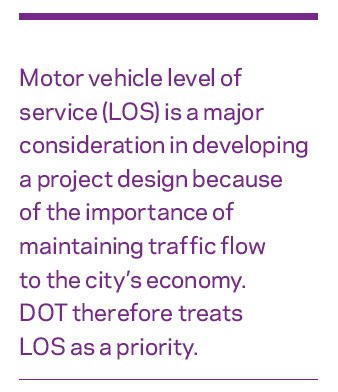 BIG LETTERS tell us what we suspected all along: avoiding a 1 minute delay for a driver  is a priority while LOS of pedestrians or bicyclists are not even referenced in the analysis required to modify a street.

Words have power: This reveals a fundamental dissonance  between the speeches that  Mayor De Blasio and Commissioner Trottenberg make on Vision Zero and the actions of the engineers in charge of implementing : their focus continues to be on vehicular flow and use of 1970 car centric measurements to make decisions on the design of our streets.

A sentence that actually reflect the Mayor’s policy would have been: “After safety, Levels of Service for all street users are a major consideration in developing a project. DOT therefore will use city-appropriate measurements to ensure such goals”.

The National  Association of City Transportation Officials (NACTO)’s  Urban Street Design Guide says” LOS measures impacts, but inadequately captures a project’s potential benefits. As a metric, it is mono-modal, measuring streets not by their economic and social vibrancy, but by their ability to process motor vehicles” .The guide is “A blueprint for designing 21st century streets… .”

Even the Federal Government is working on replacing LOS after California has replaced it in its environment reviews. ”Barbara McCann of the Policy office of the Secretary at U.S. DOT told Streetsblog that her agency has been charged with reviewing internal policies that are an obstacle to better biking and walking. “LOS is something that has come up with that,” she said. Despite what you may have been told, “there is no federal mandate for Level of Service,” she said. The federal government has never compelled state and local governments to emphasize LOS above all. But Level of Service is a deeply ingrained engineering convention. Transportation planners might not be attuned to the value judgments inherent to LOS, or to its flaws.”Angie Schmidt. Streetsblog

New York city DOT is using 1970 car centric measurements to preserve flow and reduce car delays while other cities are rushing ahead using 21st Century models to improve safety and livability. New York is falling behind.

In 2013, speaking at a NACTO conference on the relation between community and DOT during major projects. I suggested to the attendees (Senior personnel in DOTS of various cities) to retrain their engineers, which I thought were the major obstacle to increased safety and livability.  It is disheartening that New York is still in this category in 2016.

This is a bad omen for Vision Zero which depends heavily on street re-engineering, to achieve its goals. It looks like New York  revolution is only superficial.  Not good enough for the 1800 additional persons that will be killed if the pace does not accelerate.

4 Responses to Why is Vision Zero progress so slow in NYC?