Will bicyclists and pedestrians ever be on the same wavelength?

Following the September 2018 publication of the New York City Department of Transportation (DOT)‘s study “Cycling at a Crossroad”, a cyclist and a pedestrian joined forces in developing a simulator to identify the best possible signal timing, one that would provide the maximum safety to both pedestrians and cyclists while guaranteeing the longest green wave for cyclists, pedestrians and vehicles. 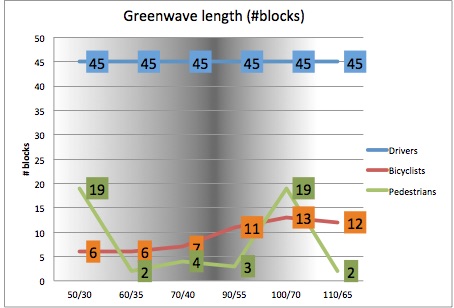 Based on 6 simulations with over 10 variables each, the best scenario would deliver a 13-block green wave for cyclists and a 19-block green wave for pedestrians without delay for car traffic, which would be proceeding at 25 mph. In this scenario, out of 70 seconds of green light on the avenue, Split Lead Bicyclist Intervals (Split LBIs) would provide 30 seconds of full protection for cyclists and pedestrians, and then 40 seconds of semi protection with a yellow blinking arrow. This duration could be adjusted case by case based on the volume of turning cars. 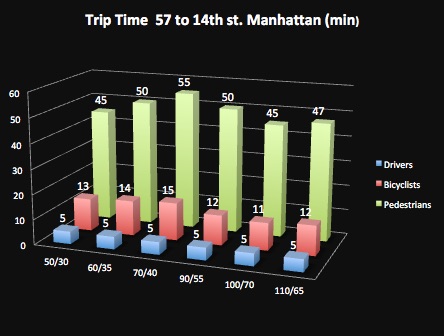 The DOT study was in response to bicyclists’ complaints that the mixing zones are difficult to negotiate and feel unsafe. Pedestrians had long complained as well that those intersections were dangerous. In 2013, DOT published statistics showing that about 25 % of pedestrian fatalities or injuries occurred at intersections with a left turn movement.

The study concludes that the “Delayed Turn” (aka Split LBI) – one of the two pilot designs that show promises – provided for the lowest rate of conflict between turning vehicles and bicycles. The signal provides a conflict free head start for bicyclists before turning drivers are given a blinking yellow arrow to proceed with caution. Similar treatments called Split Lead Pedestrian Intervals (Split LPI) are already installed at various pedestrian crossings in the City.

However the conflicts remains – albeit at a much-reduced rate. Cyclists had been resistant to pedestrian advocates’ call to install Fully Split Phases that provide 100% protection from turning cars. This treatment causes cyclists to stop at every other traffic light making their trip cumbersome, or at worst giving them an incentive to run red lights. As part of its reports’ recommendations DOT plans to develop strategies to improve signal coordination that reduces bicyclist stopping and delay along corridors with several Fully Split Phase intersections.

How does it work? The simulation we developed is novel for several reasons. The goal was to identify what light cycle length would allow drivers, bicyclists and pedestrians to arrive at the intersection during the green phase as often as possible. As far as we know, no traffic engineering has taken advantage of the alternate timed speeds, which are possible when traffic signals are timed. Conceptually, think of this as hitting one block near the start of the green cycle, the next near the end of the green cycle, and so forth.

To  illustrate this concept, consider how traffic signals are timed in the first place. In general, traffic engineers stagger the light cycles so if you travel at a predetermined speed, you will always reach each intersection at the same point in the light cycle. For our simulation, where we assumed 20 blocks to a mile, and a timed speed of 25 mph, the signals had to be staggered by 7.2 seconds, as this is how long it takes to travel one block at 25 mph. Now consider that a person who takes 7.2 seconds plus one light cycle will also arrive at each block at the same point in the light cycle. Interestingly, this isn’t the only possibility mathematically. You can take 7.2 seconds, plus any number of light cycles, and find yourself in a green wave. And if the green cycle is longer than half the total cycle time, then 7.2 seconds plus ½ the total cycle time to go a block can work. So can taking 1.5 times the total cycle time to travel one block, and so forth. 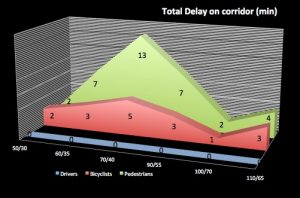 The only downside here is for closely spaced signals alternate green waves only exist for pedestrian speeds, not cyclist speeds. However, this doesn’t preclude finding light timings which are much more advantageous for cyclists than current light timings. This represents a zero-cost method of speeding up cycling on streets where it’s possible to time traffic signals in the first place. The one-way Manhattan Avenues represent one of the best opportunities for this novel approach. 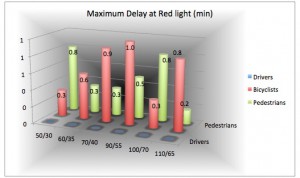 The simulation is also notable for the fact that we accounted for cyclist acceleration. This makes the simulation much more realistic, as we all know that it takes some time to get going again after a stop. Fortunately, others have done research of typical cyclist acceleration rates so that we didn’t have to just guess. For the purposes of this simulation we assumed an acceleration rate of 1 mph/sec up to 15 mph, and 0.5 mph/sec thereafter. We also assumed a cruising speed of 15 mph. This might be a little on the high side, but the percentage delay is similar for lower speeds at the most optimal timing. Also worth noting is that percentage delay will decrease at speeds over 15 mph. Therefore, faster cyclists aren’t negatively impacted by optimizations which benefit a range of slower cyclist speeds.While of course removing as many traffic signals as possible is the best way to optimize things for pedestrians and cyclists, unfortunately this approach will not be feasible in places like Manhattan without first dramatically reducing motor traffic. Therefore, optimizing signal timing as well as it can possibly be optimized for all street users, not just motorists, represents the best way forward at present.

Finally we can all get along…

Joseph Realmuto is a graduate of Princeton University (major electrical engineering) and Bronx High School of Science. He took a course in transportation engineering and planning while at Princeton, and has pursued an interest in all facets of transportation. In the last ten years he has developed a keen interest in the livable streets movement. Christine Berthet graduated from HEC France with an MBA in Operational Research and worked for IBM as a systems engineer. In 2005, she co-founded Chekpeds, a pedestrian advocacy group that developed Crashmapper.org, a web-based application to analyze traffic fatalities and injuries.