All of the current proposals will have a major impact on the fabric of the Clinton/Hell’s Kitchen Community.  The Port Authority proposes to demolish 3 block-fronts on 9th Avenue, in the heart of the neighborhood, wiping out hundreds of apartments, small businesses, community organizations and houses of worship. The plans also propose to move the bus terminal to the residential portion of our neighborhood, between 9th and 10th Avenues, in order to maximize their real estate assets on the commercial corridor of 8th Avenue, thus hurting both commuters and residents. 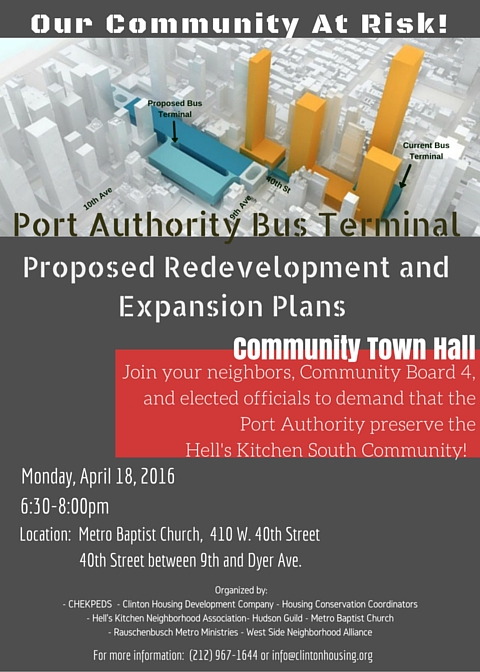 For an in-depth look at the competition , click Here.

Whether you attend the meeting or not, it is critical you fill out the survey, which asks about “property acquisition”, the process by which the buildings would be destroyed.

I live in one of the buildings targeted for demolition. It took me 5 years to find this apartment and I’ve been here over 15 years. These buildings were newly renovated when I moved in. These buildings aren’t luxury by any means but they’re rather nice in a basic sort of way. Management puts a lot of effort into making the outside attractive with flowers and plantings and such. Management also selects pretty good people for these apartments. I’m lucky to have them as neighbors. This is NOT urban blight. As much as I understand the public need for an updated bus terminal, tearing down these buildings and community services, that are so vibrant and useful, is barbaric and uncivilized. While I sympathize with commuters who use PA, I seriously doubt if any of them would give up their homes so that I could have a more pleasing commute. So why should I give up mine?

I’ll start my comment (which is a little long, unfortunately) by summarizing it:

A. The proposed expansion of the Port Authority Bus Terminal would inflict an environmental and planning catastrophe on the West Side of New York City.
B. The PA must first devise a coherent master vision that has public support before any cost-benefit decisions are made.

1. Hell’s Kitchen is a beautiful, historic, densely populated district of New York, and a world-famous attraction for tourists. However, because of the Lincoln Tunnel traffic, it is the third worst NYC neighborhood for hazardous air pollution; and (according to the American Highway Users Alliance) it is the site of the 8th worst traffic bottleneck in the USA (the Lincoln Tunnel). Clearly bus traffic to the PABT is a substantial cause of these problems.

2. Now it is proposed that the 8,600 daily PABT bus trips should be increased to around 13,000 bus trips, and that a facility be built to enable 500 buses to idle near the PABT. It is proposed, in other words, to dramatically worsen an already intolerable air pollution and road traffic problem. This makes no sense at all, to put it mildly.

3. Furthermore, it is envisaged that particularly iconic, beautiful, and communally precious blocks of Hell’s Kitchen will be destroyed to make room for the new PABT. This also makes no sense. If the blocks had to be destroyed in order to make way for an unarguable benefit to the city and region–say, a world-class railway hub that connected JFK to Times Square/NJ Transit/Amtrak–then the partial destruction of a historic neighborhood might conceivably be acceptable. But that isn’t the case. It’s proposed to destroy these blocks in order to build a transportation facility whose only supposed beneficial effect is in fact a negative effect: a huge increase in bus traffic.

4. Note that there isn’t any suggestion that the new terminal would have any kind of architectural merit–indeed, what is apparently envisaged is a larger version of the current PABT, in which a gloomy, suburban-style shopping mall is buried inside a monstrous facade. The presence of an unprecedentedly massive and ugly building on Ninth Avenue would therefore be a severe business blight. The tourists who currently sustain the restaurant businesses on Ninth Avenue north of 34th Street would obviously go elsewhere. The neighborhood would have to absorb not only an environmental blow but a huge economic blow.

5. Note, also, that nobody has asserted that the current PABT is unable to function with reasonable efficiency. There is no talk of a transportation crisis. Nor is there any guarantee that transportation patterns will not radically change in the medium or long term and that the very idea of bussing in thousands of commuters daily will not fall by the wayside as technology changes and carbon-reduction targets take effect. And the merest stroll through the current PABT discloses its huge potential for refurbishment and reorganization. It is a cavernous place with a lot of dead space. Surely it is not beyond the wit of architects and designers to bring about a gradual but real improvement of the space for its long-suffering users.

6. To reiterate: the stated goal of hugely increasing bus traffic into the West Side is fundamentally flawed. We need fewer, not more, bus trips. Every day brings fresh knowledge of the lethal consequences of urban pollution. This is New York City, not Beijing. Our citizens will not be commanded to accept their own destruction in order to bring about outcomes perceived to be desirable by an unelected handful of political appointees horse-trading between themselves–the PA commissioners.

7. In fact, the credibility of the PA is at stake here. A bizarre, in fact scandalous, feature of the PABT discussions is the evident lack of a coherent and technically accomplished master plan for the transportation of commuters from NJ to NYC. There has been no indication of (1) the total number of commuters estimated in future years; (2) how any estimates have been arrived at; (3) whether and if so why these numbers are desirable, not least in the light of pollution, traffic congestion, and carbon production; (4) what proportion of these commuters will be traveling via the proposed Gateway train tunnel and the proposed new PABT; (5) what environmental and planning values are applicable to the process. Instead we see chaotic and adversarial pronouncements by commissioners and legislators, private bargaining, and a total exclusion of informed, never mind enlightened, urban planning voices. Observers could be forgiven for concluding that this enormously consequential public issue has somehow ended up in the hands of a few technically unqualified, politically and economically self-seeking individuals. It’s a scarcely credible state of affairs.

8. What’s needed, to restore public trust in the authorities and to produce the best outcomes, is a thorough study by technically qualified, impartial persons–I don’t know, fly in a bunch of people from port cities like Stockholm or Amsterdam–that looks at the entirety of NY-NJ transportation issues with a view to enabling an informed public discussion about (1) core values; (2) a holistic transportation vision that takes into account car traffic. Only then can productive and sane cost-benefit conclusions be reached, and be trusted.

9. My own thoughts on transportation values–for what they’re worth; I’m no expert–is that it seems a no-brainer that: (1) rail travel should be maximized; (2) NJ-NY bus travel should be quickly and totally electrified, so as to drastically reduce their pollutant effect; (3) we should be very mindful that traffic patterns will soon be transformed by self-driving vehicles, smart roads, ride-sharing, etc., not to mention carbon reduction targets; (4) Hudson Yards and/or the far West Side are much more suitable locations for a commuter hub than Eighth or Ninth Avenue; and (5) we will no longer accept the daily transmogrification of beautiful and fragile Hell’s Kitchen into a traffic hell that endangers the wellbeing of our children and older residents especially.

10. One final thought: Mayor de Blasio, where are you? Your city needs you, now.