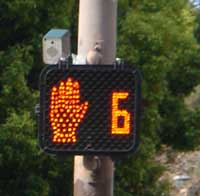 This past week end , residents of Hell’s Kitchen discovered new pedestrian countdown timers on the crossings of 9th Avenue at each intersection between 34th Street and 57th Street, as well as at 34th Street and 8th  Avenue.

This is terrific news for all of us who brave the flow of New Jersey commuters every day. The timers also highlight the fact that the pedestrians crossing time on the avenue was increased in 2010. Last summer, the avenue crossing span was shorten by 35% , thanks to the pedestrian refuges installed as part of the bike lane.  We expect this increased time and space allocation to translate in improved safety for all.

The Actors Fund was instrumental in highlighting this need as a result of the Senior’s Need Survey they performed last year. They advocated tirelessly for this feature with our elected officials and the results are here! Bravo and thank you to Barbara Davis and her team and thank you to Speaker Quinn for her support.