This week we testified at a City Council Hearing on the collision that killed Samuel Cohen Eckstein. This family’s pain left everyone – including all council members present – in tears.   City Council reps, Transportation Alternatives and members of the public spoke unanimously in support of a bill to lower speed limits to a life-saving 20 miles per hour on residential neighborhood streets citywide. DOT opposed it suggesting that such requires a study of every street.

Committee Chair James Vacca  is frustrated by the gradual pace of the Slow Zone rollout — the timetable for currently approved zones now stretches to 2016 — the limited number of approved zones, and the backlog of requested speed bumps”. He pledged to push the next mayor to accelerate the implementation of Slow Zones.  Vacca and Lander acknowledged that NYPD, which did not send anyone to the hearing, does not prioritize traffic enforcement. CHEKPEDS has testified two weeks earlier that Crash Data is critical to the proper deployment of resources to crash-prone intersections.  As demonstrated by the excellent Transporation Alternatives’ report “The Enforcement Gap” , Lander complained that offenses including speeding, red-light running, and failure to yield are rampant. Of NYPD’s enforcement stats, Lander said, “Anyone who took street safety seriously and believed in data would be appalled.” (courtesy of Streetsblog).

NYPD typical response is : “Traffic fatalities are down 30 percent since 2001 and at the lowest level in a century of record keeping,” said John McCarthy, a spokesman for the NYPD, in an email. However looking at the data published by the NY State DMV, tells a very different story: 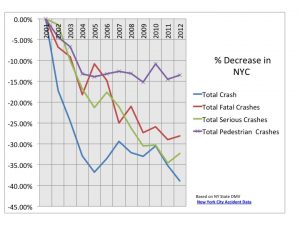 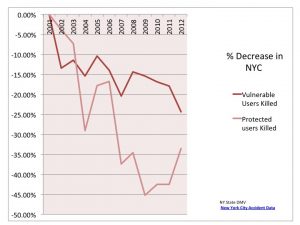 And the injuries to Vulnerable Users have decreased by 12% while injuries to Protected Users have been reduced 53%! lets now forget that injuries include incapacitating lifetime conditions.

So what gives? These statistics show that vehicle manufacturers are doing the lion share to protect people within the vehicles. The same cannot be said of the road engineers and the NYPD whose performance is most evident in the protection afforded to pedestrians and bicyclists.

The overarching cultural bias to put vehicular traffic flow and safety ahead of vulnerable users flow and safety has to stop as well as the NYPD cultural bias that people in vehicles are more in a rush and more protection-worthy than cyclists or pedestrians. The tale of two cities goes way deep, it is pervasive and it needs to be addressed in all aspects of public life  and government.

When we get rid of egotist Kelly, hope to see improvement in pedestrian safety and an NYPD who cares. Presently too much time spend arresting minorities for small amounts of weed under the pretext of looking for weapons.

It’s ridiculous that the 4-lane highways (avenues) and 1-lane side streets have the same speed limit. It’s just common sense that the narrow side streets should all have lower speed limits. Waiting for this to be justified on a street-by-street basis is nothing more than a diversionary tactic.

Never underestimate the power of the automotive lobby. And the unconcern of drivers.

Not to mention the enormous cost of such studies to the taxpayer.