Yes the Superbowl was awful. Per Crain’s poll: 58% of respondents said: “Awful game, uninspired advertisements. Move along. Nothing to see here”. Let’s not forget that for a few days it completely gridlocked 9th Avenue and we had to endure hours of Homeland Security helicopters hovering over our windows. New Yorkers were miserable as the real life was sucked away from New York and an artificial one took its place. 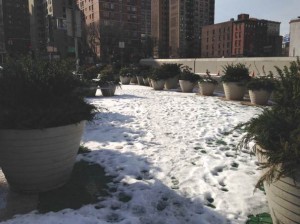 But there were a few silver linings: the Garment District BID had to relocate all its planters to make space for the Super Bowl boulevard and was kind enough to donate 25 additional planters  to green Dyer Triangle. Thank you to Barbara Randall and Leigh Harvey for their generosity! there are now 65 planters on the plaza. Our next step will be to add trees and shrubs to augment shading and privacy. 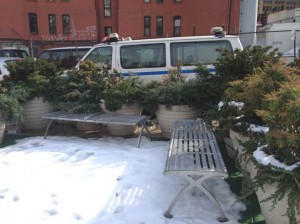 And then on a larger scale, this was the first “Mass Transit Superbowl” and it (mostly)worked. Demonstrating that such a car centric event – one that embodies so much of the cultural identity of the nation – could be sold out and successful without cars is a very significant milestone.