Under significant pressure from the community and its elected representatives, DOT agreed to add 33 real pedestrian refuges to the proposed 6th Avenue bike lane between 8th and 33rd Street. Community Board 4 will vote to approve the revised proposal in February. 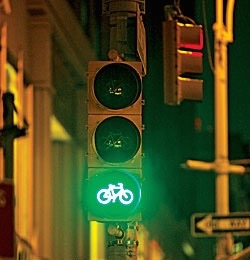 You know this picture of 9th Avenue bike lanes that DOT uses in many  presentations? Wide median, turn lanes, cute little bike signals, red arrow signals, flexible bollards?  Just like a presidential campaign, very little of it remains true. If you get a bike lane today, it is not going to look like this at all.  Unlike the bike lanes on 8th and 9th Avenues in south Chelsea, the DOT has now stripped its bike lanes proposals from all pedestrian safety features: gone are the true pedestrian refuges that allow shorter avenue crossing and gone are the split phase left turns that  provide exclusive time for pedestrian to cross the side streets and for bicyclists to cross the intersections.

DOT analysis in 2014 demonstrated that such features yield 80% more safety than other types bike lanes. Still DOT engineers steeped in years of car focus deny the obvious and advocate for as little safety as possible. To proof, the DOT presenter still talked about “accidents” instead of crashes and denied the validity of their own studies. 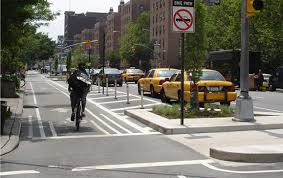 It has been difficult to endure the wrath of our bicyclists friends during these past two months. But we did the right thing and we won big for all. The refuges will be built with plantings inside.

Unfortunately we were not successful in our bid to win more split phase signals; the DOT plan for only 2 of them will leave 9 intersections  unprotected where 65% of injuries took place in the past. A real shame. What is the point of redoing corridors in Vision Zero if DOT does not intend to make the whole corridor safe? This becomes a bike lane installation instead of a complete street or a Vision zero project. More marketing. 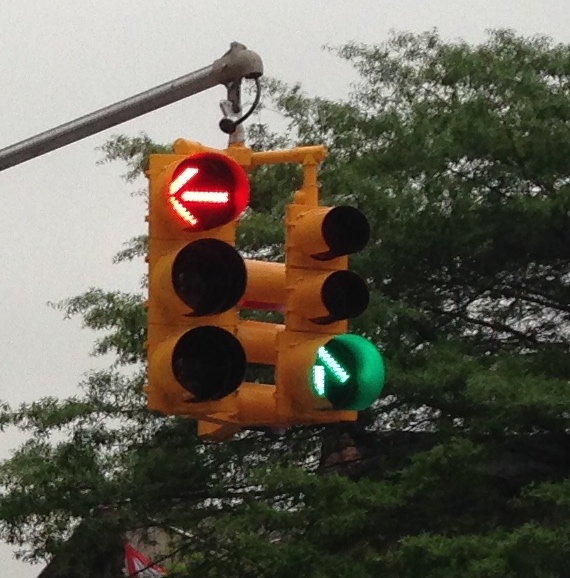 For Vision Zero to succeed, we need more safety – not as little as possible. If the life of your children, family or friends depended on it, would n’t you ask the doctors to do “everything possible ” to save them? This is certainly the standard car drivers and government ask of car manufacturers. There is no reason why we should not ask the same from street designers.

Chekpeds will continue to make the point that Vision Zero is more than press conferences and power points presentations: it needs to permeate deep into the agencies and their projects and bring as much safety as possible to the pedestrians and cyclists.