Congratulations: Megabus is Out for the Time Being …

Thanks to your efforts DOT announced today, that it will not convert the three months 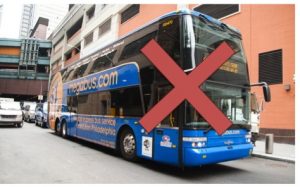 temporary permit of Megabus at 41st Street between 8th and 9th Avenues into a permanent one.  View the Crain’s Article.

Based on your petition signed by 168 people, on testimony from neighbors and the Port Authority , on Assembly Member Richard Gottfried’s strong testimony , and on the dismissive  attitude of the Operator’s executive, CB4 voted last night to send a strong letter urging the DOT not to renew the permit.

We also learned that the stop on 10th Avenue, between 40th and 41st Street is being reevaluated as well.

This is a terrific victory showing that Yes We Can.. thanks to all of you who made phone calls , sent letters, signed petitions and showed up to testify at meetings. Your efforts were worthwhile. We have sent a strong message that our neighborhood is not a dumping ground for all buses in the city. But lets stay alert …

One Response to Congratulations: Megabus is Out for the Time Being …