Our community has been asking for the removal of phone booths for years. These bulky and ugly appliances have given shelter to illegal activities, while being of very limited utility and taking up a lot of real estate on our sidewalks where the crowding is intense. They were there to support advertising .

We started working on this matter in 2008! neighbors did surveys, inventories, letters etc.. and since then we have been diligently negotiating for their removal , first with the help of Borough Presient Gale Brewer who locked in reduction of 40 booths. The balance was due to be converted to LinkNYC two years ago . 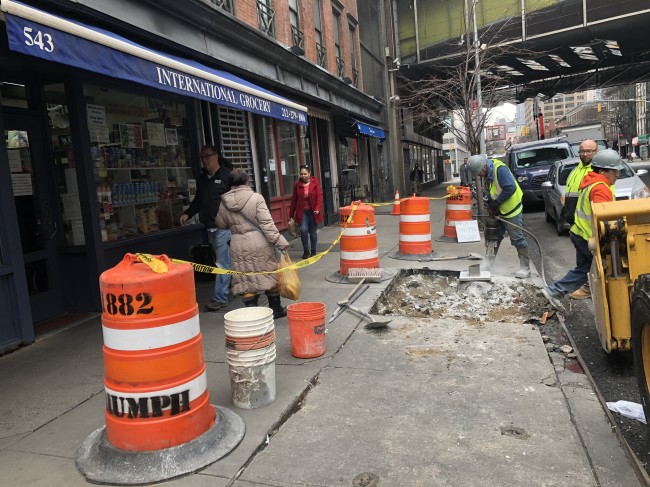 Now with the drug trade returning to Hell’s Kitchen, the block associations clamored for removal of phone booths which facilitate the illegal activities. the link operator has not lived up to its commitment  , and City Council Speaker wrote a letter to the Department of Information Technology and Telecommunication (DoiTT) asking for the old booths to be immediately removed. Fortunately, the new commissioner agreed with him.

Already 20 installations have been removed with a second wave in the works ! The infamous booth at West 44th Street and 9th Avenue , and the one on 9th Avenue at West 45th street we sought to remove 10 years ago, are gone …  The sidewalk are restored providing new space for pedestrians to walk on and see through. Their removal demonstrate how  much real space and  visual obstructions these booths were causing.  This is a huge victory in our fierce and endless fight to reclaim the real estate that belongs to us – the pedestrians.  Thank you Speaker Johnson !