It is a new day on our streets: New york will be the first American city with congestion pricing

The Congestion pricing plan has been included in the governor’s budget after garnering sufficient support to pass in the State legislature. There are still many hurdles ahead of the final budget and law, including all the wrangling by special interests looking for exemptions and control.

What comes out may not be ideal, but the principle will be established and a giant step toward better streets will have been taken. It will be up to this and future mayors to use this free space to improve streets for people on all fronts, rather than let vehicles come back and choke us again. 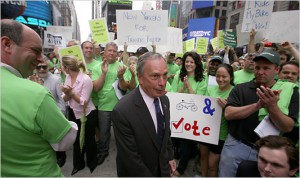 We have come a long way since 2007 when our members were holding boards behind  Bloomberg in Times Square. Hats off to him and Janet Sadik Khan who championed the concept. And hats off to Speaker Corey Johnson who threw the gauntlet down by declaring he would do it if the State did not.

In our small way we contributed to this campaign by educating lawmakers on their benefits in their district , whether they are located  upstate or downstate and we published a research showing that 71 lives could be saved and 17,000 injuries could be avoided by Congestion pricing in New york city.

For CHEKPEDS  members, whose motto is Less Traffic = Better Streets , it is indeed a day to rejoice. And NO it is not an April’s fool post.