This month the DOT presented a proposal for a parking protected bike lane on 7th Avenue between Clarkson and 30th Street. While in the past the discussion may have focused on loss of parking, this year all the questions from the public and the committee were on intersection safety.

Following the death of a cyclist on 2nd Avenue two weeks ago, the cycling community is becoming more aware that mixing zones are dangerous, a fact well understood by pedestrians: in the last five years  drivers turning when both drivers and pedestrians have a signal to proceed at the same time have killed tens of pedestrians.  It is good to see that everyone is now focused on safe bike lanes, not just any bike lanes. This will be a necessary ingredient if bicycling is to capture a larger share of the commuters.

If it was up to CB4 , the whole bike lane would be equipped with split phases , like the lower part of 9th Avenue , which have proven to be 100% safer than mixing zones.

We understand that DOT is experimenting with Split LPIs on bike lanes. The first two were installed in CB4  on 9th Avenue at 25th and 29th streets and then on 2nd Avenue at 26th and 30th streets. You can see  how it works here. This configuration gives s strong sense of safety to pedestrians, although the 7 seconds of real protection is woefully insufficient. For cyclists, it still leaves the problem of cars blocking the bike lane during the 44 seconds balance of the cycle, forcing bicyclists to pass the car either in traffic or in the pedestrian crossing or to dismount.

Another variant is the Spilt LCI (Lead Cyclist Interval) which after a protected phase of 25 seconds – would put all users on notice that the crossing is dangerous, and hold them equally responsible for being careful while crossing. 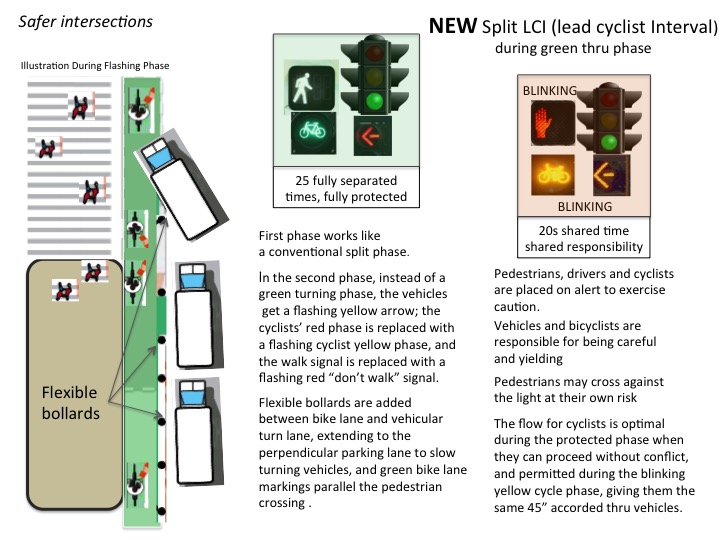 NO matter which solution is adopted,  we need to get rid of mixing zones and unprotected intersections sooner rather than later. They are deadly for pedestrians and bicyclists while the cars always come out winning and unscathed.