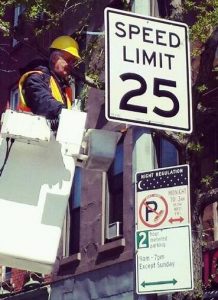 Both the  Assembly and the State passed bill S07892 allowing New York City to reduce its default speed limit to 25 mph from the current 30 mph. Both Assembly Member Dick Gottfried and Linda Rosenthal were  proponents  and  Senator Brad Hoylman was front and center in the Senate battle in the last day of the session. Governor Cuomo still has to sign it into law, which we expect him to do.

This seemingly small 5 mph reduction cuts by half the chances of severe injuries : At 30 mph, chances for severe injuries are close to 50%, while at 25 mph, they decrease to just above 25%. Further, the 140 speed cameras that were approved in April will issue tickets at 35 mph (10 miles over the speed limit as mandated by the law). 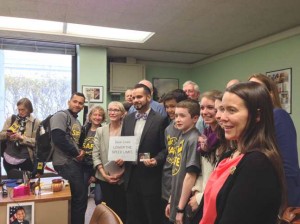 This effort – started in 2012 – gained momentum this year in the context of Vision Zero, a Home Rule vote by the City Council and the determined and emotional efforts by Families for Safe Street who went repeatedly to Albany to convince lawmakers.  Chekpeds joined them in April.