Depeche from the Transportation Avant Garde 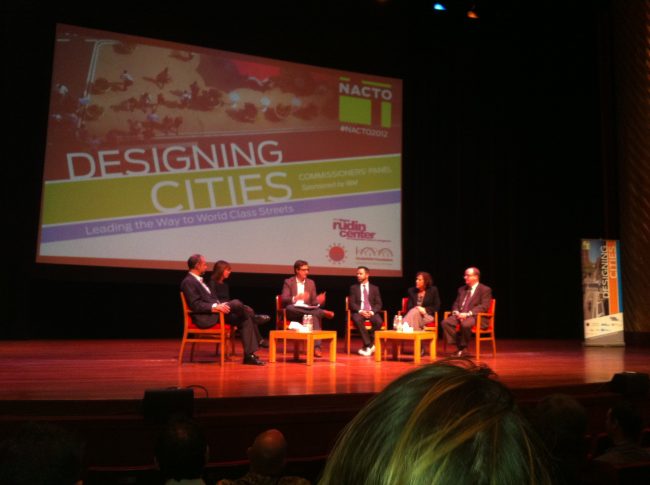 Last week, Transportation Officials from all over the country gathered in New York City for three days to report on their latest projects, compare notes and learn from each other. They were plenty of walking tours and Christine Berthet ( the author) represented Community Board 4 , the only community to be invited to this event. Here are some takes :

Secretary of Transportation Ray Lahood opened with an energizing speech: he insisted that the gains in safety and street sharing we have accomplished will not be undone by the next administration: ” we are not going back“. He went on to talk about the current federal transportation funding law called “MAP 21” which penalizes transit, bike and pedestrian investment “The best thing about MAP 21? it is only two years long”. He and others encouraged the attendants , all sophisticated practitioners to make it a serious political issue with their respective elected officials.

On involving the community, San Francisco uses a process they call BYOR ( Build your Own Roadway), where DOT and the community collaborate in charettes all along the process. By making the community smart on the options, they have been successful at removing much more parking lanes than they expected . A good example to adopt in New York.

On pedestrian safety, one speaker indicated that “delaying pedestrians has serious implications, drivers are more tolerant of delays“. When a metrics panel was asked what is the safety component in the current Metrics (the infamous Level Of Service LOS that was established 40 years ago) the moderator Joshua Shank responded : “a certain level of fatalities is accepted”.. !!!!!! Until the engineers are re-educated , we will not succeed. That much was clear in the presentation I gave on the safe street panel.

Boston delighted us when they said with a Boston Accent ” we are removing “Paaaking” because if you build it they will come…“. We wish City Planning and EDC took a trip to Boston and get on the program!

On Funding and Transportation Equity, San Francisco seems ahead of the pack: they consider critical to capture land value to fund Transportation. They are also giving car sharing companies on- street parking in exchange for making car sharing available in low income communities. Their experience has been excellent, with those cars being well taken care of and becoming the most used of their fleet. If only car share and bike share were installed in Low income communities in NY !

In order to streamline the administrative process and bring real life to Transportation Oriented Development, Philadelphia broke down government silos and merged agencies. We wish City Planning was merged under DOT in New York.

All speakers deplore the lack of focus on cities in Washington these days. With 75% of the population and 80% of the GDP , cities should be a fundamental topic of discussion. This statistic will explain why more and more population must live downtown: to take a job with one hour longer commute, you would have to be compensated 40% more to make up for lost time!

It was inspirational to see a group of forward thinking leaders take on the fundamental change that is playing out in our society. When asked by the moderator if it was just a fad, Philadelphia responded best: “we do not have a choice! people are flooding to the cities and there is no way to expand the size of the streets… So we have to figure a way to pack more users in the network!”