Progress Report on the Bike Lanes and Bike Share Stations

On 8th Avenue, the new striping to delineate the bike lanes and parking spaces has been installed from 34th Street to 42nd Street. We expect the balance up to 58th Streeet to be installed as soon as the weather permits. Then the pedestrian refuge , signs and signals will be installed.

Keep an eye out for the new sidewalk extension between 42nd and 43rd street (10ft or more).

On 9th Avenue we are all painfully aware that the avenue has been resurfaced (with much late nigh early morning noise and a dust storm for one week). New lanes markings have been painted that take in account the space needed for the bike lane. That installation will take place in July starting at 58th Street and proceeding down to 33rd Street.

It will include a micro plaza at 41st Street and 9th Avenue, straight from the 9th Avenue 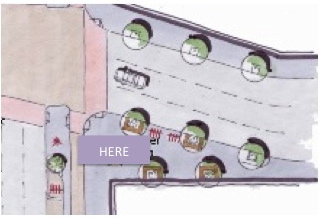 CHEKPEDS has identified all damaged pedestrian crossings adjacent to the new bike lanes and requested that DOT prioritize their repair, hopefully giving us an improved walk lane in addition to the bike lane.