The US DOT thinks so , and that is why 2016 is the first year when self driving cars became a reality on multiple levels: the US DOT published rules to create a regulatory framework by  types and related expectations and some sates (Nevada, California, Florida, Louisiana, Michigan, North Dakota, Tennessee and Utah—and Washington D.C.)  ( Pittsburgh) have legalized their use on the road. Technology companies, (Google)  car companies (Tesla , Ford and Audi ) and fleet companies (Uber) are actively working in that space. It is anticipated that New York State legislature will be asked to legalize them in 2017. 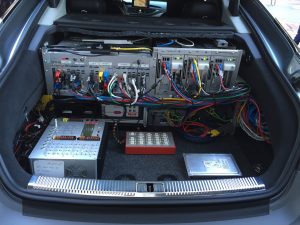 Earlier this year Manhattan Borough president Gale brewer convened a summit with DOT and car manufacturers  to better understand what the NYCDOT is doing to prepare the city for the advent of driverless cars. 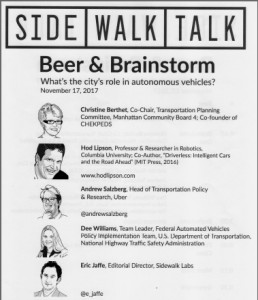 And in November Sidewalk Labs whose offices are located on Hudson Yards invited CHEKPEDS to participate in a public chat on the matter.

I am no expert but it seems like there is a long way to go for these vehicles to deliver on increased safety in an urban environemnt:  first it is not clear how much of the technology is dedicated to recognizing pedestrians as a priority. Second, most of the technology currently in operation requires that a driver be alert and ready to take over .  This is a concern since currently drivers get distracted even when they are engaged, and the science shows that it is more difficult for the human brain to perform in exception mode once disengaged.

Driverless technology is being developed where the cars will be able to avoid all obstacles, but  it may be dependent on  some features embedded in the surroundings: special traffic signals, cameras, very good markings etc. This could become the highest priority for the DOT instead of installing pedestrian safety features.

As for our local concerns, I raised three :

More generally, will the software of self driven cars be “localized ” to reflect driving styles when they will have to compete with aggressive New York drivers during the transition?

A lot to think about , but it is happening so let’s hope the US DOT is right and pedestrian lives will be saved.  In the meantime we will remain vigilant on the matter especially when the legislation comes to a vote in New York.