At this time of year we’d like to reflect on our progress and stake out a few goals for 2019. There is much to like about 2018.. 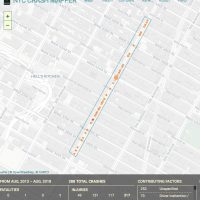 In 2018 we launched Crashmapper.org, a web tool that received many accolades from the press, the agencies and the advocates. The tool maps and analyzes traffic crashes using variety of filters. As one advocate said: ” we used crashmapper to demonstrate that an intersection is dangerous and getting worse. The numbers helped us win the support of the community board in Brooklyn” . We have demonstrated it to many parties including the Borough President who will include it in the training of new board members in the future.  We  will continue to promote its use across the board.

Re-engineering the Intersections for safety

The DOT completed a study of safety at bike lanes intersections we advocated. While the full split phase 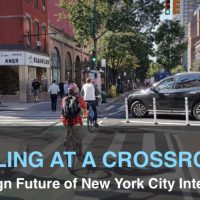 signals installed on the lower part of 8th and 9th avenues are the safest , the interruptions in cycling flow is a major inconvenience to bicyclists that may encourage them to run through red lights. DOT has proposed two new pilot treatments : (1)  a large island that continues until half of the cross street: it forces drivers to slow down significantly before turning (2)  A delayed Turn ( a.k.a. a split LBI or LPI) which gives pedestrian and cyclists a certain amount of time of fully protected crossing ( with a red arrow for cars ) followed by a semi protected phase, with a blinking yellow arrow for cars. While this still needs some tweaking , we are delighted the Split LPI has been selected, as it has proven beneficial to pedestrians in our district. 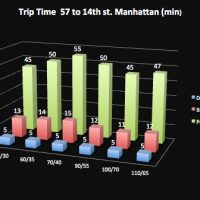 Moving on to the next challenge: to convince DOT to provide walking and cycling the same level of service that is afforded to driving. CHEKPEDS partnered with Joe Realmutto an engineer, to develop a simulator of traffic lights. The goal is to find duration of traffic lights that will deliver the longest green wave to pedestrians and bicyclist, while maintaining a 25 mph maximum speed for cars. Why should DOT only study cars and not other street users?

DOT committed to install split phase signals at 57th Street and 8th and 10th Avenues as part of  bike lanes installation on the upper section of 8th/ Columbus circle, and 10th . They will also install some split LPis on those segments . Our elected officials Assembly member Linda Rosenthal and Council Speaker Corey Johnson were instrumental in getting us these favorable outcomes ! Thank you Erica Overton and Erik Botcher.

Following deadly crashes and our letter, Senator Hoylman obtained that the State DOT initiate a study of safety at the intersections along the Hudson River greenway. 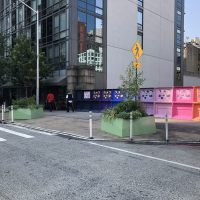 safety and for an improved pedestrian experience. Bulb outs , planters, street seats , murals and a mid block pedestrian crossing all make it one of the best streets for pedestrians in the city. 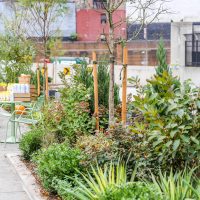 Similarly , CHEKPEDS worked with HYHK, the Port Authority, and Quadrum to complete  the Canoe plaza with a second row of eleven trees and plantings on the north side of the promenade.

CHEKPEDS board members continue to work very hard to 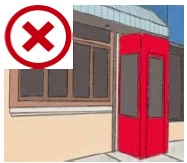 ensure that pedestrian right of way is maintained on 8th and 9th Avenues: They distributed flyers to more than 200 shops and restaurants to advise them of how to make storm enclosures and sandwich boards compliant with the laws.  See what you can do to address this issue .

2019 presents a huge opportunity with congestion pricing:  We are part of a citywide coalition “ Fix Our Transit” working along side of 100 prominent organizations that support the plan. Congestion pricing has proven very good for safety: in London, crashes decreased by 40%  in the two years after the congestion charge was established! a much needed remedy in NY since it 2018 is ending on a sad note: more pedestrians were killed that the previous year.

We will continue our critical work on the replacement of the Port Authority Bus terminal , as part of the HKS (Hell’s Kitchen South) Coalition.

e-scooters and e-bikes will be discussed at the city council in January – Please read the letter CHEKPEDS sent to our elected officials on the matter.

We  will make sure DOT delivers on its safety commitments, in particular at 41st street and 10th Avenue at a district school; that 11th Avenue is converted to one way north of 42nd street  as the last deliverable of the Hell’s Kitchen DOT study; that the study of 8th avenue ( 37/47) is completed and that the traffic signals are adjusted to 25 mph in the district. We will also track the results of the Hudson Greenway study underway.

We will be working on setting up a borough wide sidewalk obstruction task force and on removing garbage from the sidewalks. We will continue to disseminate information on ADA ramp guidelines and on illegal obstructions.

Thank you to all of you who support us and read us . Let us know in the comment section if there are additional items we should focus on .