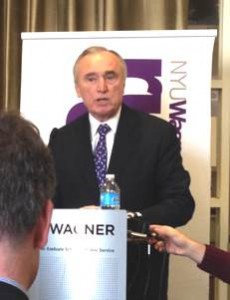 In November well before he was selected for New commissioner, Bill Bratton discussed his views on the matter at a Transportation Alternative panel. The former chief speech was followed by a panel discussion featuring one of the creators of the “broken windows” theory of policing Bratton is credited with executing, who argued that the approach should also be applied to traffic violence. “The Bloomberg administration has spent a significant amount of time and focus on redesigning the streets,” Bratton said. Of police traffic enforcement, he said, “More can be done in this critical area. The time for this issue has come.”  Then in his acceptance speech he mentioned traffic violence and the need to put it under control. A First for NYPD.